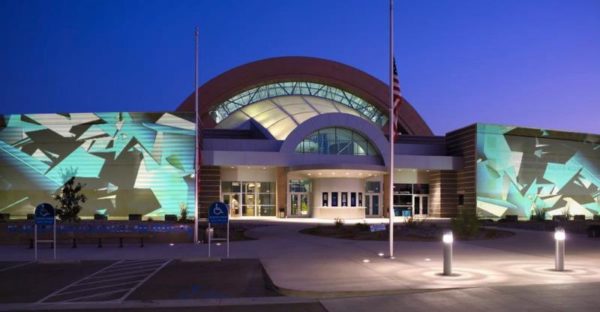 January 24, 2020: See the Anderson-Abruzzo Albuquerque International Balloon Museum as you have never seen it before during Lighten Up Albuquerque.

The event put on in collaboration with the city of Albuquerque, Electric Playhouse and Epson will illuminate the front of the museum with original artwork on Friday, Jan. 24.

“What they’ll do is they will set up two large projectors out in front of the balloon museum on the front side on both sides of the ticket booths,” said Linda Hubley, operations and events supervisor at the museum. “So basically the whole front of the building will be lit up. So what they did, being Electric Playhouse, is they put a call out to different artists, and artists actually submitted proposals, and the artist that got chosen for our location, his name is Bryan Carlson. He actually works at Electric Playhouse.”

Carlson is an entrepreneurial technology developer interested in creative applications of math, electronics and software. The projection borrows from the balloon museum’s form, colors, shapes and overall detailing. The idea is to work off the structure’s existing embellishments with shapes being brought to life with the use of motion, change of color and other fluid transformations. Digital content will overlay the artwork to create “illusory techniques” such as moving voxels and 3D lighting, according to information provided to the museum about Lighten Up Albuquerque.

There is plenty to appeal to all the senses during this event.

“What we decided to do was, in addition to the visual component, is we turn it more into a festival-like atmosphere, where we will have a DJ on-site playing music to the projection,” Hubley said. “We will have a beer garden … provided by Marble Brewery. We will have food truck dining outside, and we will also have a static balloon glow, weather permitting.”

The inaugural Lighten Up Albuquerque project started on Jan. 3, at the historic KiMo Theatre and will conclude on Feb. 1, at Electric Playhouse.

This is the first time the balloon museum has worked with Electric Playhouse but not the last.

“We’re really excited to have this partnership with Electric Playhouse because they are, as you know, they’re the buzz right now,” Hubley said. “There’s a lot happening with them right now, and we’ll also be working with them on some future exhibits. It’s exciting.”

SEE THE ORIGINAL ARTICLE AT THE ALBUQUERQUE JOURNAL