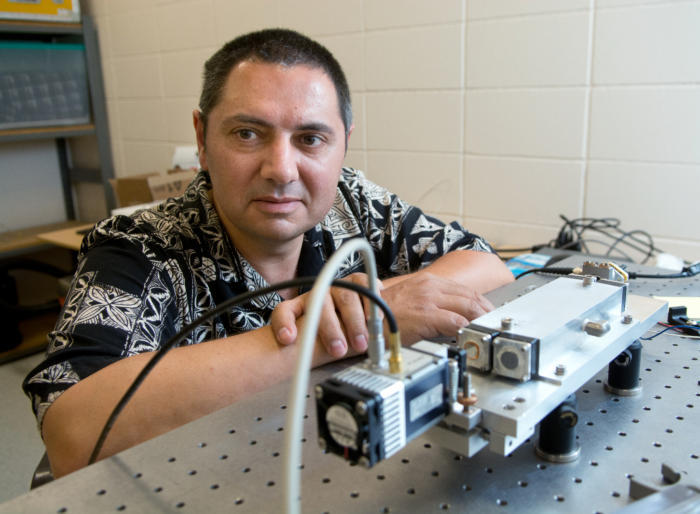 The National Institutes of Health already financed initial testing on people at the University of New Mexico Hospital and at Emory University in Georgia with promising results. And follow-on funding through NIH’s Rapid Acceleration of Diagnostics, or RADx, initiative is in the works to expand testing to more institutions across the country, said RingIR founder, President and CEO Charles Harb.

“The UNMH trial showed we had something potentially groundbreaking,” Harb told the Journal. “So RADx decided to extend its involvement.”

Dr. Justin Baca, a UNMH emergency room physician who worked with RingIR on the NIH-backed trial, said there’s a lot of interest in the scientific community to further test and develop the technology based on initial results.

“In the preliminary trials it looked very promising,” Baca told the Journal. “If it bears out when testing a lot more people in different settings, it could be a game changer for rapid testing in mass settings.”

Harb launched RingIR in Albuquerque in 2016 after nearly a decade of research and development on the technology, which the company calls “molecular fingerprinting” to detect, identify and measure the molecules of nearly any gas in any setting. It’s based on a commercially available optics sensing process known as cavity ringdown spectroscopy, or CRDS, that uses lasers to measure light at the molecular level.

The company further advanced that process using infrared light to color-code targeted molecules for identification, and it built an advanced data processing system to immediately measure and report findings in real time.

Since 2016, the company has won contracts in the U.S. and Australia to apply its technology to detect gases in mining operations, and for anti-explosives detection, said Harb, a quantum optics physicist from Australia.

The company successfully proved its technique through a $4.6 million award from the Australian Defense Department to locate and identify vapors exuded from explosives. RingIR has since won a second Australian defense contract to begin building mobile units that could be used to counter improvised explosive devices, or IEDs.

It also proved the technology’s ability to detect silicate dust, which causes black lung, through testing at mines in Australia. That led to a new, $300,000 contract awarded last year by the U.S. National Institute for Occupational Safety and Health to build a prototype device for potential use in U.S. mines. RingIR is now building the mine-focused device, which will be tested by the New Mexico Institute of Mining and Technology in Socorro.

“The Australian study showed the (silicate dust) signatures could be seen spectroscopically,” Hard said. “This new contract allows us to takes the next step forward to actually build a demonstration unit. If all goes well, we’ll work to get the instrument into the real world for testing in mines.”

The company has also worked for three years with the Woods Hole Oceanographic Institute in Massachusetts under a $1.5 million National Science Foundation grant to place small detectors in tubes for carbon readings in deep ocean settings.

“We’ve built three units for the institute – one unit per year,” Harb said. “We’ll deliver the third unit in June, all to measure methane in the ocean.”

Before the coronavirus broke out last year, the company had begun working as well with Johns Hopkins University in Maryland to apply its technology in research on vaping devices to study the impacts of electronic cigarettes on people’s lungs.

“That got us into initial work with human beings,” Hard said. “Then COVID hit, creating an urgent need for new diagnostic tools.”

Early in the pandemic, NIH created its RADx initiative, funded by the CARES Act, for rapid development of new testing methods for COVID-19.

“The first rounds of RADx funding aimed to get anything out in the real world with emergency authorization to deploy devices,” Harb said. “But many didn’t work and people stopped using them because there were lots of false negatives.”

RingIR entered the RADx program in its second round of funding last summer.